Droning On About Standards

Recently there has been much activity in the media about the use of drones. One gets the impression maybe rightfully so, that drones are whizzing around the place, in an uncontrolled manner.  Hardly a week goes by that one does not read an article about a drone causing some type of incident such as violating airspace, crashing or causing an accident or even scaring air traffic controllers as drones get in the flightpath of airlines. Birds have brought down airplanes before, can you imagine the damage that could be done if a drone crashes into an airliner on takeoff or landing, the most critical time for the pilot? The outcome could be catastrophic and cause the loss of many lives. Drones need to controlled in such a manner as to cause minimal or no disruption to our lives. Hence federal and state agencies are seeking to develop standards for the operation of drones to protect the population, to enhance drone safety and to minimize incidents.  There needs to be a standard.

The janitorial services industry is driven by labor, professional and hard working men and women that go about their work, day in and day out to provide the citizenry clean and safe workspaces. However, many times accidents occur because of slips, trips or falls on wet floors or dirty floors. Indoor air quality issues arise because of dust or molds that have not been removed, and even by the manner in which these chemicals are used.  It has often been said “That we have found the enemy, and the enemy is ourselves.” The enemy in many case is the manner in which we use chemicals. The accidents that occur due to the improper use of chemicals can cause human misery through unnecessary accidents cause by the lack of safe usage of chemicals. Accidents such as skin burns, accidents that cause injury to the eyes, or worse, the loss of life caused by mixing chemicals incorrectly. Like in the drone industry the need for a standard in the use of chemicals in the janitorial industry is well overdue. For far too long thousands of janitors and custodians as well as building occupants have been injured or adversely impacted by the improper or unsafe use of chemicals.

Thus a standard that provides for the safe use of cleaning chemicals is essential to the safety and health of millions of custodians and the building occupants that are exposed to such chemicals.  In April 2014, the Simon Institute (www.simoninstitute.org) was designated by the American National Standards Institute (www.ansi.org) as an accredited ANSI standards developer (ASD) for the cleaning industry. In 2016, the Simon Institute initiated actions for the development of a voluntary standard for the safe usage of chemicals by custodians and janitors. The objective is to limit injuries to custodians and those impacted by the use of chemicals in facilities, while minimizing the hardships and costs of such injuries to individuals and building occupants.

One does not like to drone on about standards, however unless some standard is developed for the safe operation of drones, accidents caused by the drones will only increase as more and more people and industries use drones. Likewise, thousands of custodians, janitors and building occupants will continue to suffer from the improper use of chemicals unless a standard is in place that will encourage the safe usage of chemicals across the Jan/San industry.   You can make a difference by becoming involved in developing this and other standards for the Jan/San industry. 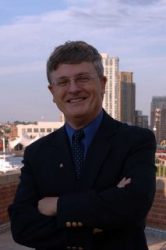 Bigger has been involved with ACUBSS, IEHA and APPA. He is a past-president of the Midwest Association of Higher Education Facilities Officers (MAPPA); a seven state regional organization affiliated with APPA, and has served two terms as the Vice President of Professional Affairs for APPA. He served as President-Elect, President of and APPA 2007-2008.